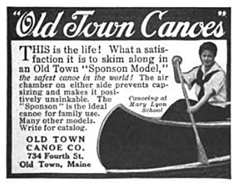 The Bangor Daily News had a nice piece on the Old Town Canoe Company today, and while the crux of the article was regarding the now closed original factory location, there is quite a bit of information regarding the history of this iconic Maine company. There are scores and score of companies that have built canoes, and still do, but few have risen to the reputation and excellence the Old Town Canoe Company has achieved. When a sportsman thinks or talks of canoes, most assuredly the name Old Town is forefront in nearly every conversation.

Of course, the company has new digs they are enjoying which are much more accommodating to today’s modern manufacturing methods, and the canoes they build are made of synthetic materials, and not the natural wood and canvas products used in the past. Time changes all it seems.

I came across a letter to the “trouble Department” column of Power Boating magazine[November, 1914], and the writer[B.B. of Portland Ore.] says he installed a four horsepower motorcycle engine into an 18 foot Old Town Canoe, and wanted to know what size propeller he should use to get the most speed from that motor. The reply was that he should reduce the 4100 rpm speed of the motor to a third of that and mount a two-blade 14×16 propeller on the shaft for the best speed. We men were daring in those 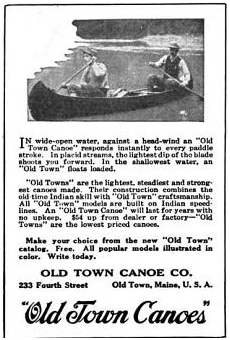 These advertisements shown here to the left were taken from several early 1900 periodicals, and they show the range of product this company was able to provide, even in the early days of Old Town’s life. One model in particular, the “Sponson” model even included air chambers along the sides to prevent capsizing and sinking of the canoe should an unsuspecting (or reckless) paddler get too close to danger.

Speaking of the early 1900s, I believe one of the reasons Old Town has persisted for over a century is its dogged resistance to the changing times, while at the same time being able to change with those very times as they change. WWI was no exception to the rule. As the war caused many companies to fold due to retracting sales, the management of Old Town Canoe grabbed the paddle and forged ahead by increasing their advertising and reaching out for new markets to conquer. Their strategy paid off, and because of their ability to adapt and change, is still around today.

That ability to persevere in spite of the circumstances seems common in Maine, or at least it used to be. A Mainer would see that something needed to be done, and he(or she) would get it done. There was no intent to gain glory in honor in doing a job, the job was done because it needed to be done. companies failed for many reasons, but others succeed for a very few reasons. The drive to carry on in spite of the obstacles is just one of those reasons.

So what were the circumstances that caused Old Town Canoe to become such an iconic presence in the outdoors world, and why do 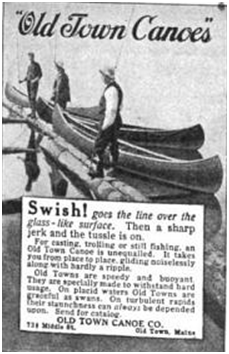 they keep selling the world’s best canoes today? There are many answers to that, of course, but I believe we can summarize by stating that this company, which essentially began as a back room extra income business has stuck to its core standards, and while changing with the times in some respects, still adheres to the age-old mantra of pride and quality going hand in hand. They know what they do well, and they stick to it.

Many age-old companies have changed with the times, but the core values of the companies have changed as well. Take Abercrombie & Fitch, for instance. Once they were the premier outfitter of the world. If a sportsman wanted hunting, fishing or camping supplies, their first choice was Abercrombie. They were so prominent; the TV show MASH had an episode where Hawkeye Pierce even ordered a portable bathtub from the company. Today, they sell clothing of objectionable taste to teeny-boppers who obviously have no taste. Relegated to a few thousand square foot sales floors in the nations malls, this company today faces a prospect of extinction because they have wandered so far from their core audience.

Not so for Old Town Canoe, and I hope they never compromise their name, nor their reputation for the sake of easy money, no matter how trying the times become. Compromise begets many negative things in some instances, but never more so than in the manufacturing and retail scenes. Remember when Black and Decker was a name you could trust and respect? Sylvania? General Electric? Or even here at home, L.L. Bean? I remember when you could get top quality merchandise for the outdoorsman. Today, they have come to compromise their own core standards in favor of catering to big city wannabee sportsman who want to look the part as they tool around town in their pricey SUVs, wanting to look rustic, but not willing to pay the real price to be rustic. Don’t get me wrong, you can still get good quality merchandise, but it isn’t like it used to be. Time changes all things (but not necessarily), remember?

A brief piece in the April 25, 1909 issue of Motor Boat magazine perhaps says it best when it comes to the power of owning a canoe, and in particular an Old Town canoe. Those were the days when sportsmen were sportsmen, and getting away from it all was the real prize, although bagging a trophy was indeed icing on the cake.

THERE’S a great deal that might be said about Old Town canoes, a great deal more than can be spoken in this brief space. These canoes are built by the Old Town Canoe Company, at Old Town, Me. Canoes are about the most primitive craft; they were used by the early tribes of mankind, and throughout the ages the canoe has survived, until we find it, refined and perfected in the Old Town models. They are found in all parts of the world, thousands of them. To the owner of a motorboat cruiser the possession of a canoe will bring many hours of

pleasure that could not be enjoyed by any other means. A canoe carried on deck enables one to explore out-of-the-way waters, to seek the beauty of shallow streams. The writer cherishes the memory of many happy hours spent in an Old Town, paddling leisurely upon almost hidden creeks, beneath the foliage of overhanging trees, in absolute peace. If you would know rest, and seek quiet, if you would meditate, would muse and dream, as you need to, get a canoe and take it with you when you cruise. The illustration shows the cover of the Old Town Canoe catalogue, and it is a book worth reading, it breathes the spirit of the thing in every line. A copy is free to any reader of Motor Boat.

If your historical society, group, or museum has news, events, information or other items you'd like to see here, please email the information to editor@touringmaineshistory.com.